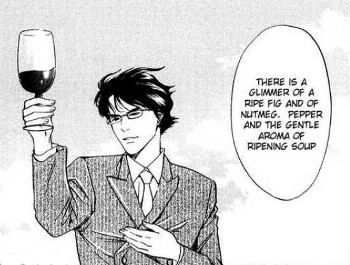 (Note that the first word in the trope name is pronounced "suhm-uh-lyay.")

In fiction and satire, if someone is called upon to describe the flavor of a wine, they will begin speaking in a kind of Purple Prose which may include any of the following:

A variant combines this with Alien Lunch or I Ate WHAT?! — another substance is mistaken for, or passed off as, wine, and the unwitting drinker describes it in similar terms. And see also Expensive Glass of Crap.

Partial Truth in Television, as detailed in this article.

Wine is complex (often several flavour notes will be in the same one, and the combinations can sound discordant, like black cherry/pepper/tobacco) and volatile (the lingering taste in the drinker's mouth, called the "finish," can be different than the initial sensations), and chemical analysis of wine shows that the descriptors fairly consistently refer to the same flavor/aroma compounds. It is also important to note that the terms used to describe wine flavors, like "black cherry" or "plum," do not necessarily mean that the wine tastes like those things — rather, these are agreed-upon terms for specific but hard-to-articulate flavors; The Other Wiki has a glossary.

This is not helped by the fact that some people's palates detect tannins more strongly than others, which can result in all alcoholic beverages just tasting of tannins and alcohol, no matter how a sommelier might describe it.

Basically, wine critics are wrestling with the same problem as the makers of perfume commercials, i.e. attempting to describe the characteristics of something in a medium ill-suited for the job. (See also It Tastes Like Feet for the Evil Twin to this.) Not surprisingly, the end results are similar.

While most commonly seen with wine (because Wine Is Classy), the terminology is used for other drinks (including tea, coffee, beer, spirits, and cocktails), with variations.note For instance, even amateur spirit/cocktail tasters frequently reference "rum funk," a sort of overripe-banana-plus-fermenting-vegetation note that appears mostly in aged and cane-juice rums (particularly ones from the English-speaking Caribbean and most especially from Jamaica and Barbados) but can also show up in whisk(e)y and brandy, but a typical wine sommelier won't have a clue what you mean because that note is very rare in wine. Similar to Hash House Lingo, which also involves a particular jargon for culinary concepts.