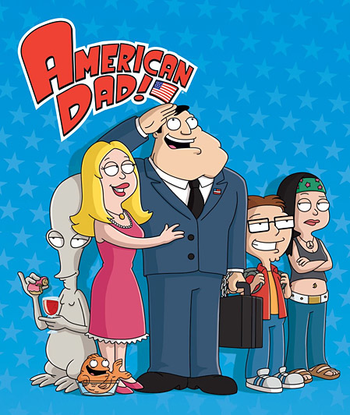 L to R: Roger, Klaus, Francine, Stan, Steve, and Hayley.note Not pictured: Jeff Fischer.
"Good morning USA,
I've got a feeling that it's gonna be a wonderful day!
The sun in the sky has a smile on his face
And he's shining a salute to the American race!
Oh boy it's swell to say,
Good morning USA!"
— Stan Smith singing the show's theme song.
Advertisement:

American Dad! is the second Animated Sitcom from the creator of Family Guy, Seth MacFarlane, along with Matt Weitzman and Mike Barker.

A pillory of American ultra conservatism played out on Rupert Murdoch's network, it follows the daily life of paranoid and extremely patriotic CIA agent Stan Smith, his over-protective wife Francine, nerdy teenage son Steve, and liberal and rebellious teenage daughter Hayley. The pilot episode explains that, on a mission, Stan uncovered a runaway talking alien named Roger, who lives in the family's attic for protection from getting turned in to the federal agency, until he adapted more to the outside world and became more outgoing through the use of various disguises later in the series. They also have a talking German goldfish named Klaus, who used to be a human.

Early in its run, American Dad! followed a similar formula to Family Guy, but quickly developed its own identity by emphasizing story and character development while downplaying most of its parent show's trademark shticks, like the cutaway gags, flashback twists, surreal humour, overly long gags, and frequent references to pop culture. Initially, the show relied on caricatures of political personalities, as well as some of the more visible and controversial aspects of the right wing's policies and ideologies (although granted, usually the Strawman Political version of said policies) and was, in MacFarlane's words, "...going to be the next All in the Family". Over time, however, as the characters' personalities began to be fleshed out, the show became less and less political in nature, to the point where only a small portion of the episodes featured politics as an active theme (curiously, as this was taking place, Family Guy was steadily becoming more political).

Because of low ratings and Fox's plans to revert the Sunday night line-up from "Animation Domination" to "Sunday Funday", American Dad was canceled on Fox, but has since been picked up by TBS.

Vote for the best episode here

Good morning TV Tropes, I have a feeling that it's gonna be a wonderful list:

Bye, have a beautiful time!
Feedback

Example of:
See You in Hell

You Got A Kink

PUNCH IN THE FACE!

Don't Be a Hero

You Got A Kink

PUNCH IN THE FACE!

Don't Be a Hero