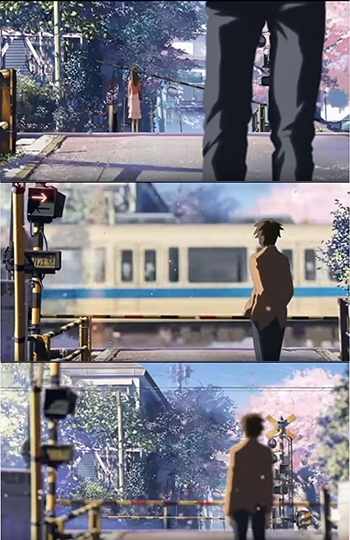 Alice wants Bob for something, whether because she wants to talk to him face-to-face, kill him, or she's just leaving and is looking back over her shoulder. Suddenly a bus or large truck comes out of nowhere between the two, and in the split second it takes to pass, Bob has mysteriously disappeared.

This may happen when Bob is apparently not looking, and therefore wouldn't know when to duck out of sight; alternatively, Bob may be standing there, grinning and staring at Alice, right before he disappears. It might be revealed that Bob latched on to the speeding vehicle justifying this trope.

If Bob really wants to show off, he'll do this with a single person walking past, rather than a vehicle.

Related to the Stealth Hi/Bye, but with large noisy wheeled props. See also Train Escape. If the vehicle itself vanishes, that's Dude, Where's Our Car?. A child-themed sister trope is Carousel Kidnapping.