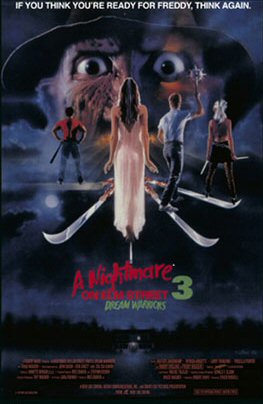 "Sleep.
Those little slices of Death.
How I loathe them."
— Edgar Allan Poe
Advertisement:

Freddy is still plaguing the dreams of the teens of Springwood. Their condition is thought to be psychological, and several of them have been placed in a psychiatric hospital. Nancy Thompson, the Final Girl of the first film, joins the hospital staff, planning to help the kids to realize powers within their dreams and become the Dream Warriors to defeat Freddy.

Following the mixed reception of Freddy's Revenge, New Line managed to convince Wes Craven back to write a sequel that makes no mention of the events of the second film and brings back the protagonist of the original feature, Nancy Thompson. The film added more dark humor into the Elm Street formula by having Freddy make jokes and one-liners about his victims' plights, an aspect that would carry over into the subsequent sequels. It also establishes the pattern of Freddy tailor-making nightmares to play off each victim's unique fears and self-doubts.