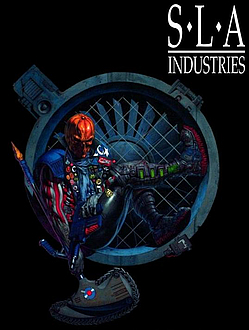 SLA Industries (pronounced "SLAY Industries") is a Tabletop RPG originally published in the early 1990s by Glaswegian studio Nightfall Games. It's set in the World of Progress, a horrific Dystopia governed by Corrupt Corporate Executives (the eponymous SLA Industries) under the control of Mr. Slayer, an immortal plutocrat with a grand plan.

The game follows the exploits of SLA Operatives, highly-trained corporate troubleshooters that the company uses for everything from quashing internal subversion to clearing mutant pigs out of the sewers. Their principal area of operation is the company's capital of Mort Central, an urban jungle the size of Eurasia, rain-soaked home to a churning mass of serial killers, terrorists, human traffickers, psychotic war veterans, killer cyborgs, cannibals, mutants, cannibal mutants, and the aforementioned pigs.

The game has had a difficult upbringing, and been subject to a sporadic release schedule on its journey through the hands of various publishers. Originally published by Nightfall themselves, it was taken up by Wizards of the Coast during the mid-1990s before being dropped in favour of something Lighter and Softer. It then survived a couple of releases at Hogshead, and before being published by Cubicle 7. Now Nightfall Games is back, and a second edition of the game was published in January 2021 (with the help of Kickstarter).

In tone, SLA Industries lies somewhere between Paranoia and KULT. Satirical treatment of consumerism, media glamorization of violence, and corporate bureaucracy coexists with brooding horror of various kinds, and the complex production history of the game has given it a variety of conflicting styles. A SLA Game Master will typically mash these together with enthusiasm, creating a unique variation of the game world.

Five words is all it takes. Five words that will shatter any illusions you harbor about our existence. Five words that, once heard, change the universe forever. [...] We are all Dream Entities.