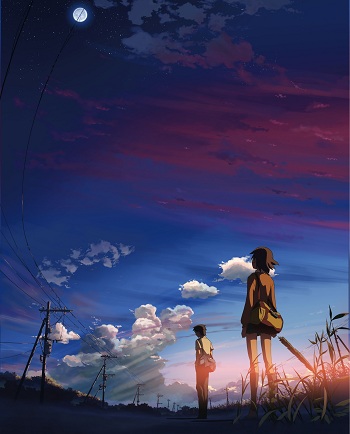 At what speed must I live... to be able to see you again?
And bit by bit, you’ll keep changing.
— Takaki Tohno
Advertisement:

The movie's focus is about two people named Takaki Tohno and Akari Shinohara, following them as they mature. It is divided into three episodes that together make up the movie. The first part, "Cherry Blossoms", follows Takaki's reflections on his relationship with Akari while they were children. The second act, "Cosmonaut", leaves Akari to depict Takaki as a teenager and is told from Kanae Sumida's perspective. The final part, which is also called "5 Centimeters Per Second", shows them as young adults, mainly through a montage set to the famous Japanese pop song "One More Time, One More Chance".

The title 5 Centimeters Per Second refers to the speed at which Cherry Blossom petals fall and acts as a metaphor for the nature of love and human relationships.

In addition to a 2010 manga and 2007 light novel adaptation, both written by Shinkai himself, there is also another novel, One More Side

. Written by longtime Shinkai noveliser Arata Kanoh and first published 2011 but only getting an English translation in 2019, it offers alternate perspectives on the film, such as Akari's side of the first act's events. The 2007 novel will be getting an English translation in 2021 in a combined release with the novel for Children Who Chase Lost Voices.

5 Centimeters Per Second provides examples of: