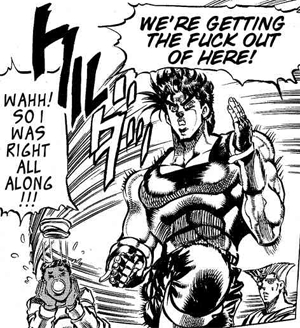 When you gotta go, you gotta go. Here are some tropes about daring escapes— from fleeing the scene of a crime, to masterminding a prison break.

Many of these stem from, or lead to, a Chase Scene.

Now if you'll excuse me, I have some very unpleasant people on my tail. Just need... some place to hide...