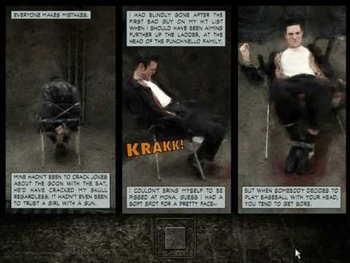 When a character is tied to a chair, bench, stool or other sitting device, they usually try to pick their handcuffs, rub their ropes against a Conveniently Placed Sharp Thing, or some other action that affects their bindings. Not so with the Bench Breaker; the character manages to break free by destroying whatever they are tied to.

This is not simply Breaking the Bonds—it usually is done by a normal human who is desperate enough to ram themselves into a wall just to damage the chair, or nearly break a limb leveraging it.

Compare Bring the Anchor Along, where the prisoner ends up dragging whatever they're tied to along with them.

Rupert and the Tiger's Eye

Rupert's Sidekick of the Week Frances reveals her escape skills

Rupert and the Tiger's Eye

Rupert's Sidekick of the Week Frances reveals her escape skills