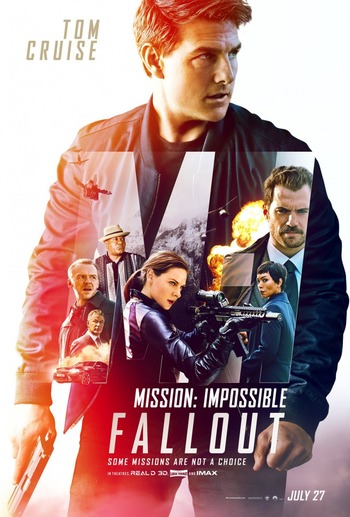 "How many times has Hunt's government betrayed him, disavowed him, cast him aside? How long before a man like that has had enough?"
"'Your mission, should you choose to accept it' — I wonder, did you ever choose not to? The end you've always feared is coming, and the blood will be on your hands. The fallout of all your good intentions."
— Solomon Lane
Advertisement:

Fallout is the first direct sequel in the series, following on from Rogue Nation. Two years after the capture of Solomon Lane, the remnants of the Syndicate have reformed into a terrorist cell known as the Apostles. Now on the payroll of mysterious anarchist John Lark, the organization is set to acquire three plutonium cores. Ethan Hunt and his team (Pegg, Rhames) are sent to Berlin to intercept the deal, but the mission goes sideways and the Apostles escape with the payload. Now under the watch of of a handler, CIA agent Walker (Henry Cavill), Ethan and his team race around the globe to recover the plutonium before it's too late.

The film was released in the USA on July 27, 2018. Not related to the Fallout video game series, asides from the occupational hazard of handling nuclear weapons.

♫ Get down with the victim
We both know you need them
You’re stuck in the middle
Of all irrelevance... ♫
Feedback