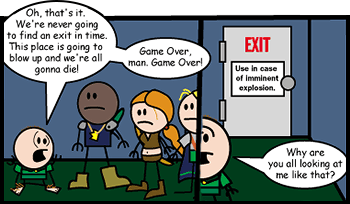 "I was standing in the lobby of this hotel just minding my own business, and this guy came up to me and said, 'Sir, could you please move? You're blocking the fire exit.' As though if there was a fire, I wasn't going to run. If you are flammable and have legs, you are never 'blocking' a fire exit. Unless you're a table."
— Mitch Hedberg
Advertisement:

Maybe you just killed a Load-Bearing Boss, maybe the bad guy built his fortress out of explodium or maybe you're leaving the Castle of Doom, having thwarted the Big Bad's nefarious plot, or perhaps you're just in a spot of bother. Whatever the background to your current plight, the room you're in is now in bits, or is falling to bits and you're screwed. No, we mean really screwed. And with the building falling apart around you, it is no surprise that the sewage system outflow is now striking the HVAC intake.

There just has to be a way out, right? Well, yes. Because if there wasn't, the section would be Unwinnable. And we can't have that now, can we?

This trope basically relates to the necessity in video games (and other media) for an escape route to exist, no matter how improbable that might be in real life. When the building around you is exploding, collapsing, on fire, in the process of being destroyed or ''has already been'' destroyed, there will invariably be one surviving path you can use to make good your escape. If the building's on fire, there will be one (und precisely von) non-burning walkway. Because fire is nice and sporting like that; it lets you win. Collapsing tunnels, building-demolition traps, self-destruct devices, etc. can all fall under this trope. Whatever the cause of the destruction, it may have happened before you got there, or it may be a Scripted Event. Regardless, it's just asking for the player to execute a dramatic Indy Escape.

Note - this shouldn't be due to the game locking the door behind you or in front of you. It applies specifically to (apparently) random destruction of the environment. Almost as if the 'right' way to go is made out of the same material as the Empathy Doll, the escape route will in most cases never actually catch fire or disintegrate itself (or if it does, only after you've gone through), allowing you to Take Your Time.

Named after (and confrontable with) the trope Big Damn Heroes.

This trope is particularly prevalent in video games, though movies also have some examples. Video games have the possible advantage of an Acceptable Break from Reality.

See also Door to Before.