Western Animation / Barbie and the Magic of Pegasus 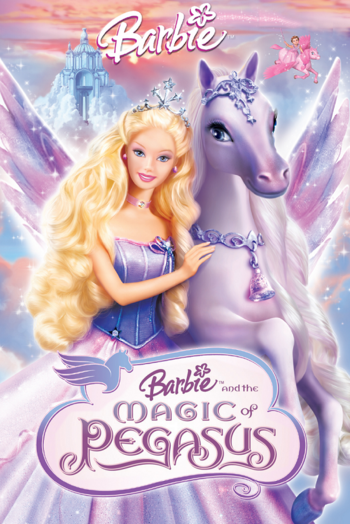 "There is always hope."
Advertisement:

Barbie and the Magic of Pegasus is a 2005 Direct to Video movie. It is the sixth installment in the Barbie film series, with its release sandwiched between the first two Barbie Fairytopia movies.

Barbie plays Annika, a sheltered princess is tired of her overprotective parents stopping her from having any fun. On her sixteenth birthday, an evil sorcerer named Wenlock appears and demands she marry him. When she refuses, he turns everyone in the kingdom, including the king and queen, into ice statues, and says he'll only change them back if Annika accepts his proposal.

Just then, she's whisked away by a talking pegasus. Brietta, as the horse introduces herself, takes Annika to a magical place in the clouds called the Cloud Kingdom, where she'll be safe from Wenlock. She soon learns that Brietta was once a human girl - her sister, in fact, who was transformed by Wenlock when she refused to accept his marriage proposal.

Annika becomes determined to save her people, her parents, and even Brietta. But to do it, she'll need to go on a quest to create a "Wand Of Light", the only magic strong enough to overpower Wenlock's. And she's got to do it in three days, or else his curse on the kingdom will be permanent.

Realizing how the Wand of Light works, Annika uses it with all her love to break all of Wenlock's spells and defeat him.

Realizing how the Wand of Light works, Annika uses it with all her love to break all of Wenlock's spells and defeat him.