Mark of the Supernatural 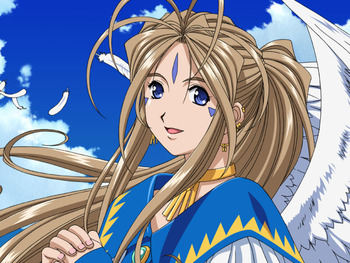 Those tattoos aren't there because of ink.* Plus the wings are also kind of a giveaway.
Advertisement:

A unique physical trait a character possesses marks them as being magical or supernatural in some way like being an alien or a shapeshifter. This could range from having mismatched eyes, to unusual hair or eye colors, to any other odd features. These traits can be part of a Glamour Failure if they give away a character's true form.

Related to Distinguishing Mark which is a marking that personally distinguishes someone from others.

If the trait is supposed to denote evilness, it's a Red Right Hand. If an evil entity gives one of these to its adherents, it's likely a Mark of the Beast. When such a mark is a disability of some sort, it is Superpower Disability.

Supertrope to Occult Blue Eyes, Glowing Eyelights of Undeath, Mystical White Hair, Supernatural Gold Eyes. Compare Power Tattoo for another meaning of "mark", for when the mark gives some power, and Claimed by the Supernatural for yet another.