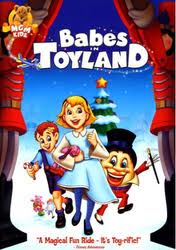 Babes in Toyland is a 1997 Animated Musical directed by Don Bluth's brother Toby Bluth, very, very loosely based on the original operetta.

Orphan siblings Jack and Jill are sent to Toyland to live with their Evil Uncle Barnaby Crookedman three days before Christmas. Though initially reluctant to take the kids, he agrees once he learns that they brought money with them to help pay for their care, intending to use it to further his own plans, and tosses them in his dusty attic. In the mean time, Tom Piper returns from the North Pole with a sizable order of toy soldiers for the local toy factory to produce in very little time.

Barnaby, who doesn't believe in toys or Christmas spirit, plots to sabotage Tom and factory owner, Mary Lamb, by attempting to buy the factory with Jack and Jill's money. When that fails, he hires mooks to vandalize the place. Jack and Jill make a couple of attempts to escape and help Tom and Mary but end up needing to be rescued when Barnaby gets fed up with them and abandons them in the Goblin Forest. With the help of said Goblins, he leads an attack on Toyland resulting in chaos. With everything crashing down around them, Tom and Mary need to work together to save their factory and town from destruction.

"The Worst is Yet to Come"

Gonzargo and Rodrigo sing to Jack and Jill about the Goblin Forest.

"The Worst is Yet to Come"

Gonzargo and Rodrigo sing to Jack and Jill about the Goblin Forest.