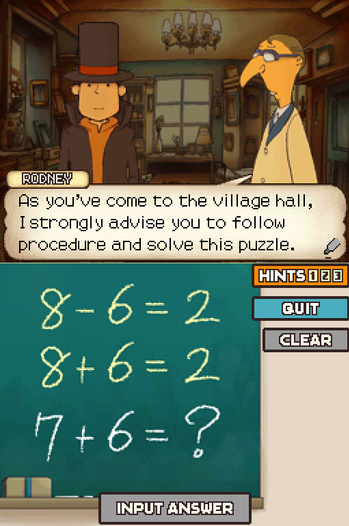 "Procedure" here must stand for "Arbitrary Adventure Game Rules".Puzzle Solution The answer is 1. The equations are referring to the time on a twelve-hour clock (8 o'clock +/- 6 hours = 2 o'clock).
"I mean, what the hell kind of villain thwarts the hero's progress with soup cans in the kitchen pantry?"
— Russ Bryan,

on The 7th Guest
Advertisement:

"Soup cans" is a derisive term for bizarre and disconnected elements included in a video game purely to serve as an obstacle to the player. The nonviolent equivalent of Everything Trying to Kill You.

In a game which includes puzzles, often, anything at all can be a puzzle. Using a Mastermind game as the electronic lock on your door might seem like a dumb thing to do, but at least the one is associated with the other. To reach the true height of Solve The Soup Cans, it's not merely the case that the puzzle seems like a contrived way to bar the player's progress: it doesn't even make sense that the puzzle should be an obstacle.

It's like this. You walk into a room. There's a chessboard in the middle, and an exit at the opposite end. It seems like you ought to be able to just walk right past the chessboard and exit via the opposite door. But you can't. The chessboard is a puzzle, and, like vampires and running water, the player can not cross the path of an unsolved puzzle.

Less egregiously, the puzzle may have a direct effect on the game world (when solved, you are given some key item, or prompt a response from some NPC), but the connection between cause and effect is not conveyed beforehand, nor is the effect something that follows naturally from solving the puzzle. Needing to Solve The Soup Cans reverses normal puzzle-solving logic: it's not that you want to accomplish some goal, and have to solve the puzzle to get to that goal, but rather, you've got to solve the puzzle because the puzzle is there, and that's what puzzles are for, and the fact that you end up closer to your goal is, at least in terms of the storyline, more or less coincidental.

Used poorly, this reduces the player to The Fool, just purposelessly blundering forward solving puzzles at random, hoping something good will happen.

This class of puzzle ran amok in the middle-era Adventure Game, and can sometimes still be seen in the Action-Adventure genre, especially during the non-action-oriented scenes of Survival Horror. When the game is educational in nature and the puzzles are designed to teach the player, then they're Alphabet Soup Cans.

Alternative Title(s): Why Is There A Puzzle Here, Soup Cans