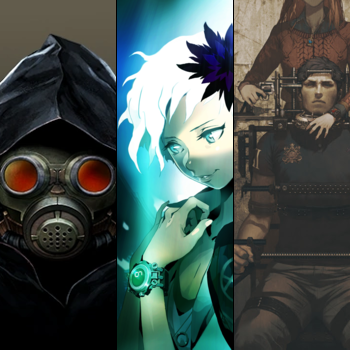 Seek a way out!
Advertisement:

Zero Escape is a trilogy of Visual Novels for handheld systems published by Chunsoft (now known as Spike Chunsoft) and directed and written by Kotaro Uchikoshi. Each game involves nine individuals waking up and finding themselves in an unknown location, in which they are forced to play a Deadly Game by somebody named Zero. The game consists of the players, each equipped with bracelets with numbers on them, using said bracelets to open doors that lead to puzzles, eventually finding and opening the number 9 door which leads to freedomnote except in ZTD, in which Zero moves them to each room and the door is the X door. As they play, they work to figure out where they are and who Zero is. The further details of this premise vary depending on the game.

Common themes include science and pseudoscience, more specifically the connection between human minds and to what extent that can be brought to. The games are also well-known for having shocking twists and turns in their plotlines; because of this, beware of spoilers, even when reading information about one game without having played the others. (Our pages for each game tend to be relatively spoiler-free regarding other games, but try to be wary regardless.)

Compare to the Infinity series, which Kotaro Uchikoshi also had a hand in writing and shares some themes and twists with Zero Escape, as well as Danganronpa, the creator of which is friends with Uchikoshi, which leads to them inspiring each other with their games. Ironically, Danganronpa is far more popular than Zero Escape, perhaps in part due to its usage of the same tropes which Uchikoshi intentionally avoided, such as a school setting and young protagonists.

You found it!
Feedback