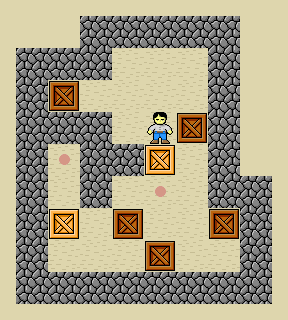 Sokoban is a game invented by a Japanese company, "Thinking Rabbit". Essentially, it's the ur-example of the Block Puzzle games.
Advertisement:

The idea is simple: Push all of the blocks inside a maze on their target positions, but there are three rules that make it tricky:

Suddenly a task that seems so simple becomes really challenging. In other words, the game can get very hard, very fast.

A lot of people liked the idea and now there are tons of remakes and new levels on the Internet. Many of them are rather difficult.