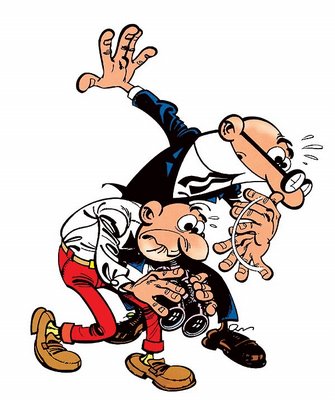 Mortadelo y Filemón (Mort & Phil in English, Russian and Japanesenote Albeit just for the comics, the live-action film keeps the original Spanish names instead in this version.; check That Other Wiki for their names in other countries) are two clumsy secret agents and the two main characters in the comic series of the same name, drawn and written by Spanish artist Francisco Ibáñez. They are known by many other names throughout the world, specially Europe, such as Paling & Ko in the Netherlands and Clever & Smart in Germany and Arabic.

The comics follow the adventures of Mortadelo and Filemón, two agents of the fictional Spanish secret service T.I.A. (In Spanish 'tía' means 'aunt', making this a Shout-Out to The Man from U.N.C.L.E. and a pun on CIA.) The two are totally incompetent and especially Mortadelo is prone to major goofs. The basic setup is that Mortadelo has some wacky idea on how to complete their mission, it backfires, and Filemón gets hurt as a result, angering him and applying some kind of punishment to Mortadelo. However, this basic setup is twisted, subverted and inverted enough for it to never get boring. The action is very fast-paced much like a Looney Tunes cartoon, with Stuff Blowing Up and Amusing Injuries all over the pages. Also, Ibáñez usually mixes his wacky stories with real world current events and fills the dialogues with every single style of pun imaginable... which they usually work (at least in the original Spanish).

Created in 1958 and still running, the strip has released more than 200 books so far (and even more short stories), it is the most popular and respected comic book series ever produced in Spain, and probably the only local franchise that can still compete in sales with Manga and American Comic Books at this point in the Spanish market. The series has also had numerous crossovers with both Ibáñez's other strips (like Rompetechos, Pepe Gotera & Otilio or the wacky neighbors from 13 Rue del Percebe) and series from other Spanish comic book artists (like Zipi & Zape, Captain Trueno, etc...).

Other important characters are: