Chased Off into the Sunset 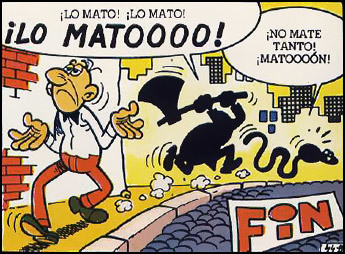 Same old, same old apparently.
"Begin the end by chasing each other into the distance, then scream comically, followed by an Iris Out."
— The Narrator, How to Haunt a House
Advertisement:

So the story has ended. The villain has been defeated, the orphanage will stay open, the girl has been rescued, and everyone just sits back to relax and celebrate their victory — right?

Except, to close the story, a character ends up chasing after another character, usually out of anger. Normally, this trope is Played for Laughs as the chased offender may have insulted someone else, did something stupid or wrong, or maybe committed some offense earlier on in the story. The two (usually it's two characters) end up in a chase while the others may look on, sometimes with indifference or sometimes even in amusement. Bonus points if they're friends or teammates, and extra bonus points if the character being chased is the defeated villain (who apparently does not Know When to Fold 'Em).

For this trope to apply, the chase has to happen at the end of the story. This could be the very end of a movie or TV show episode or just the end of an individual story in an anthology or a skit in a sketch comedy/variety show.

A type of Chase Scene and may overlap with Everyone Chasing You. If the chaser is an animal, it's Exit, Pursued by a Bear. Compare and contrast with Off-into-the-Distance Ending.

open/close all folders
Anime and Manga
Asian Animation
Comic Books
Advertisement:
Films — Animation
Films — Live-Action
Literature
Live-Action TV
Video Games
Web Videos
Western Animation
Statler: Why does every story end with the hero getting chased off in the distance?
Waldorf: I don't know, but at least it's better than getting chased underground!
Both: Doh-ho-ho-ho-ho!
Feedback