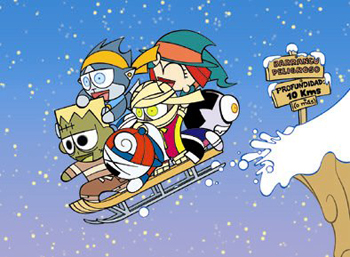 Yup, just a normal monster gang. Sure.
Monsters are real.
They exist.
Vampires, werewolves, witches, mummys and other night creatures... All of them are real.
But... Chsssst! It's a secret.
They're cities that officially don't exist. They don't appear in any human map. They're inaccessible places, protected by impregnable mountains, labyrinthine forests, terrible rivers and ancient magic. But they're beings that can get there... and live there. Beings that have something in common: they want to live peacefully, far away from humans, that plague that spreads across the entire planet.
Advertisement:
That beings are... Monsters! And they populate these cities throughout the world: Miedópolis, La Nuit Noir, Aaaah! City, Monsterland, Bloodgrad, Forever Halloween, Maldiciünd...
But we are interested in another city. Maybe is not one of the biggest, since only live there fifty monster families. Maybe is not one of the most famous, since even in some monster maps doesn't appear. But as you get to know it... Sure it'll become your favourite! It's Villa Susto... where they reach the adventures of the Mini Monsters. Who are the Mini Monsters? If you want to know... keep reading.

A Comic Book series created by the Spanish author David Ramirez, published monthly in the Spanish magazine ¡Dibus! since its start in the year 2000 until 2015, where the magazine ended being published, being one of the long-runners of the magazine. There are four monographic albums: “El Veneno de Porcelana” (2003), “El Perfeccionator” (2006), “¡Historias para no Dormir!” (2007), and “El Gran Partido de Calabacesto” (2012); and in 2018, a recompilation of the whole comic was released, including the remaining stories and some in “Todo Mini Monsters”. The plot takes in a small town called Villa Susto, where monsters who want to be far from humans live. Victor Von Piro (A high-class vampire and main protagonist) moves to Villa Susto, much to his changrin. There he meets his new friends, The Frank’s gang: Frank Einstein Jr. (A genius Frankenstein and leader of the gang), Lupo (A narcoleptic werewolf), Momses (A mummy with an obsession of sports), Gus (A cute, but fearful ghost) and Piruja (A very amorous witch). Together, they will live a lot of misadventures involving them and the rest of the people in Villa Susto.

Quotes are translated, as they’re in Spanish.

But remember, don't tell anything...
It's a secret!