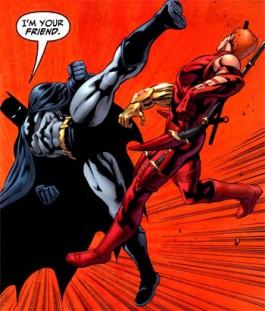 This is Batman's friendship kick.
You don't want to see his enemy kick.
"I love Dora. Sure, I might fantasize about smothering her in her sleep sometimes, but that doesn't mean we're not friends!"
— Faye, Questionable Content, strip 708

Two people are supposedly friends, except they seem to hate each other. Like, a lot. They're always bickering, insulting each other or outright whupping each other, which leaves the audience wondering, "How the hell are these people friends?" This is often because one or both are Jerkasses, though sometimes it seems that they reserve all their hostility for one other. Once in a while, they'll have a heartwarming moment which will make the audience go "Aw, Look! They Really Do Love Each Other." Then it's back to business as usual. The other option is that one will eventually go for a Uriah Gambit.

Note that the conflict does not create serious problems when dealing with worse enemies — that is Divided We Fall (which is often enough also polite).

Not to be confused with Don't Shoot the Message. For the romantic version, see The Masochism Tango and Belligerent Sexual Tension. Compare/contrast Friendly Enemy which has enemies acting like friends. Compare Vitriolic Best Buds and Odd Friendship. Contrast Who Needs Enemies?, where two characters really ought to be friends given their similar goals, but somehow aren't. May be due to coming from a Friendless Background.

Compare to Fair-Weather Friend (which one could say is a Sub-Trope to this one). See also We Used to Be Friends, where the relationship evolves from "friends" to "enemies", but isn't both at once.