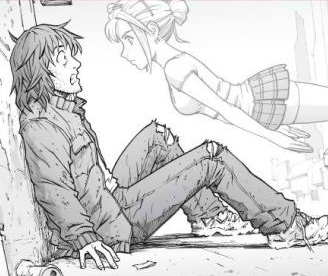 The two protagonists meet for the first time. Not the most auspicious of starts.
Advertisement:

Brody is a young loser living in squalor after a bad breakup. One day, as he's out on the street playing his guitar for tips, he finds a young girl staring at him from the inside of a van. After winning a short Staring Contest with the girl, Brody watches as she passes through the roof of the van, floats over toward him, and begins talking to him.

After Brody regains the power of speech, the girl, Talia, explains her situation: A ghost locked out of heaven for reasons she won’t disclose, she can’t enter until she commits a life task—a "super-good deed". Talia has decided to catch the serial killer known as the Penny Murderer, but as a ghost, she can't affect the world in anything but the most limited of ways. Thus, she has chosen to coerce Brody—who she claims is a ghostseer, a person who can see, and communicate with ghosts—to aid her, even if she finds him, as she puts it, "skuzzy". With the help of Kagemura — a centuries-old ghost with abilities of his own — the two must find a way to unlock Brody's hidden potential and solve the Penny Murders.

Created, written and drawn by Eisner nominee Mark Crilley (Akiko, Miki Falls), Brody's Ghost is his darkest (if not necessarily dark) work to date. It is currently being published as a six-volume mini-series by Dark Horse Comics. Four preview mini-stories can be seen here