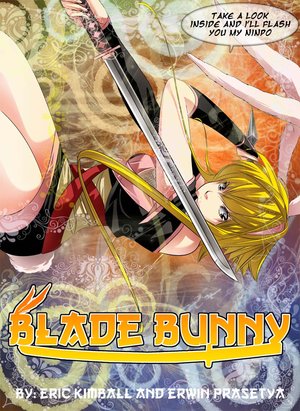 She is far more competent than she looks.
Advertisement:

is a fantasy/humor OEL Manga webcomic turned print comic by Eric "Drowemos" Kimball and Erwin Prasetya about Bunny, an assassin-for-hire in a mash up of feudal Japan and ancient China. Hired by Lord Farnalan (when his own personal ninjas failed) to kill the Head Clan of the Asaki Clan.

Things go well at first, until Wolf Fang enters the picture. Then things go down to hell, becoming embroiled in a war with spirits? and the journey to find some kind of... pearl?. It's confusing, mainly because the story is told from her point of view and she tends to fall sleep in the long boring speeches.

She wears a pair of bunny ears and a fluffy tail on the back of her skirt, oh and no underwear. While it could be considered SFW, it's very heavy in blood and doesn't pull punches in the most brutal deaths.

Blade Bunny is also published in tankoubon form by Gashu Group. The first volume was released in February 2013. Unfortunately not long after that, the comic had to go on hiatus

because Erwin got a job drawing another series

for VIZ Media. Then he got back to Drowemos with more pages and indicated they could start up again in September. As of March, 2017, the domain, and thus the archives, are gone. The comic is now released in print form only.

Drowemos is also the creator of Exiern. Not to be confused with Blade Kitten.