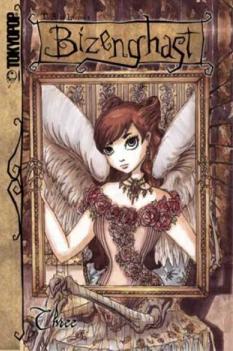 Bizenghast is a completed manga-influenced comic series written and illustrated by M. Alice LeGrow. It was being published in English by Tokyopop until the company closed. The eighth book was released in July 2012. The series has also been adapted into a novel by Shawn Thorgersen, with illustrations by LeGrow.

Set in the haunted town of Bizenghast, the story follows an orphaned teenage girl named Dinah. After trespassing in an ancient mausoleum, she is tasked with returning each night to free the ghosts within the building. Dinah is assisted by her best friend, Vincent, and two of the four tower guardians of the Mausoleum, Edaniel and Edrear. Later on, the team realise there may be more to Bizenghast than meets the eye, and something is unfolding around one Addie Clark and a strange incident many years ago.

LeGrow has released ashcan-style books of abandoned or unused plots, calling them 'Lost Bizenghast'. The series' sequel, 'The Riddle Road', is also available for purchase from the author's Etsy store, here.