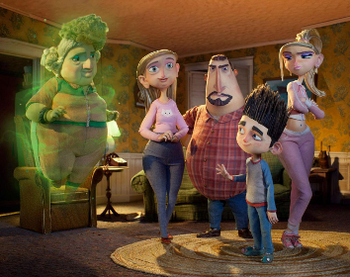 In some stories with paranormal elements, there are certain characters who can see and/or speak to ghosts. Usually, the ghost will manifest itself as whatever it looked like at the time of death, and will sound exactly the same. These characters are often the only ones who can see the ghost. Anyone else who walks into the room will see the spirit medium talking to themselves, and may take steps to get them "proper care". This can be bestowed upon a character as a gift, or it can simply be something the character "just knows".

Curiously, it often seems that those who start seeing ghosts often don't know they are ghosts, mistaking them for living people. A character who sees dead people may become a Magnetic Medium. Related to I See Them, Too and You Can See Me?.

The line is a Stock Parody, originally used by Haley Joel Osment in The Sixth Sense. Here is a compilation