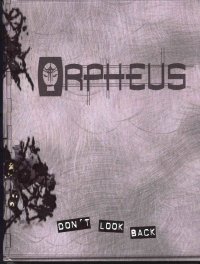 The last original gaming line to be set in the Old World of Darkness, and the first White Wolf attempt at a "limited run" game.

While Orpheus does tie in loosely with White Wolf's previous effort at the afterlife, Wraith: The Oblivion, it is not treated as a true sequel or continuation. It tackles the world of the dead following the events of the Sixth Great Maelstrom, an ethereal storm that practically obliterated the Shadowlands.

Into this turbulence enters the Orpheus Group. Orpheus has learned and perfected the art of projection, allowing specially-trained people who have undergone Near Death Experiences to leave their bodies and enter the spirit realm. Along with allied ghosts, Orpheus' living agents are contracted out to clients; they investigate hauntings, fumigate raging ghosts, and deal with other spooky spirit-related tasks. It sounds simple, but as the story progresses, things get complicated as the enemies get stronger, corruption becomes rampant, allies fall to the darkness and the line between the worlds of the living and dead begins to blur...

Orpheus player characters are defined by two factors: The first is their Lament, or way they interact with the dead. Once they figure out how to do so, characters can then access their Shade, a manifestation of their personalities that dictates the awesome and unearthly abilities, called Horrors, that they can access in death. Horrors sound cool and useful, but do come at a price, as they can raise a character's Spite, putting them closer to spiritual corruption, or can cause them to burn out their willpower or even their ghostly existence.

open/close all folders
Laments
Advertisement:
Shades
There are five shades in the core book, though the final total is brought up to eight through the other volumes, noted below.

Orpheus was notable for dropping the World of Darkness standby of The Masquerade— humanity was quite aware of the dead as the setting's run began. It also was perhaps the Old World of Darkness setting most devoted to excluding the others — little, if any, crossover advice were given, and the Core book states outright that if you want them to exist in your game, the Orpheus characters would be heavily outmatched as they are essentially plain, run-of-the-mill humans.

Only six gaming books (the core book and five supplements), plus a fictional anthology, Haunting the Dead, were released. The Orpheus story is more directed than past World of Darkness games, and completely told through the six books, via role-playing scenarios, fiction, and a set of signature characters. In many ways, Orpheus was a model for how the New World of Darkness would be marketed, especially the limited run of books and each splat forwarding the story while adding new concepts. Just as Orpheus played with concepts from Wraith, ideas from both Wraith and Orpheus would resurface in Geist: The Sin-Eaters for the New World of Darkness.

Orpheus still has a devoted fanbase, some overlapping with Wraith and many for the game in and of itself. Of course, there's also a bit of a Hatedom: some from Wraith's firmer fans, and some Old World of Darkness stalwarts who dismiss it as not truly a part of their beloved setting.

Orpheus returns in an appendix to the Wraith 20th anniversary edition, which is set prior to the Sixth Great Maelstrom and the events of the Orpheus gameline. While it is largely the same rules-wise, some changes were made. Shades still exist, but Wraith Arcanoi are substituted in place of the original abilities where relevant, and most of the Shade types are already known, apart from the Orphan-Grinders, who haven't been discovered or do not exist. While it modernizes the setting to deal with things like social media and smartphones, it also moves the timeline of the game back to where Orpheus is the only company to have discovered these powers so far, and are just beginning to experiment with journeys into the Shadowlands. The Deathlords who rule over the Western afterlife are both frightened... and intrigued.

The game settings and scenarios change greatly from the corebook to the final volume, so beware of spoilers for the later volumes below.