Film / Maps to the Stars 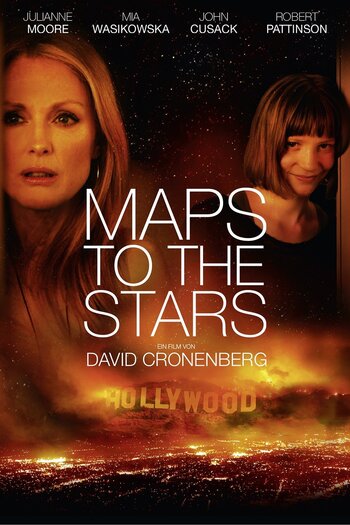 A 2014 Hollywood Satire, directed by David Cronenberg from a script by Bruce Wagner.

Forty-something actress Havana Segrand (Julianne Moore) is trying to jump-start her stagnant career by remaking the signature film of her late mother, Clarice Taggart (Sarah Gadon). Havana is also under the care of TV psychologist Stafford Weiss (John Cusack), who, along with wife Cristina (Olivia Williams), oversees the movie career of their spoiled, ill-mannered 13-year-old son Benji (Evan Bird). And Jerome (Robert Pattinson) dreams of being an actor or screenwriter, but makes his living as a limo driver.

A strange young woman named Agatha (Mia Wasikowska) - covered with burns from a childhood house fire - travels to Hollywood and inserts herself into the orbits of Havana (as her assistant), Jerome (as a client and confidante), and the Weisses (as...something else.)