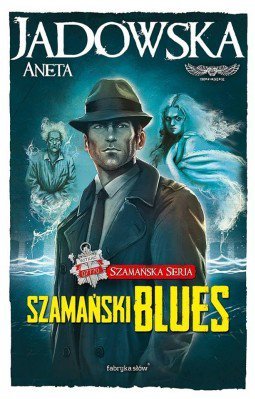 Shaman Blues is an Urban Fantasy novel by Aneta Jadowska and a Spin-Off of her previous work, Dora Wilk Series. On September 13, 2017, a sequel called Shaman Tango came out, and the series was officially confirmed as a trilogy.
Advertisement:

Throughout the first forty years of his life, cop Piotr Duszyński - called Witkacy by everyone, including himself - thought that his need to try one drug after another was just his self-destructive tendencies. Not really - as it turns out, he's a shaman, capable of contacting the dead and sending them away. This adds a whole new layer to his life, as he's now the official ghostbuster for the supernatural council running the magical underworld of his city, the ghosts can be malicious little things and he can't tell his superiors about what he truly does. Things get even more complicated when his ex, now working at a local hospital, comes to him for help. The newborn children there are dying at an alarming rate, and there seems to be no natural explanation.

The answer seems obvious: there's a ghost haunting the hospital halls. An extremely powerful, extremely dangerous and murderous ghost who has no qualms killing children and enough power to affect physical world.

Tropes present in the book: