The Thing That Would Not Leave 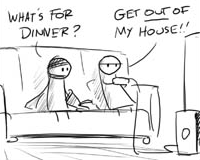 So are we going out to eat?
"It came seventeen years ago—and to this day
It has shown no intention of going away."
— Edward Gorey, "The Doubtful Guest"
Advertisement:

Everyone wants to be polite, especially to a guest in your home. Unfortunately, courtesy is not always reciprocated, and, to your horror, you can find yourself trapped with The Thing That Would Not Leave.

Many a Dom Com has used the set-up of a house guest that simply will not leave. The put upon homeowners must find a way to remove this intruder without being rude, but no matter how many times they yawn, look at the clock, or mention an early appointment for the next day, their guest remains an immovable fixture.

The most common way of getting caught in this trap is to take in a friend or relative who's down on their luck. Supposedly the situation will be temporary until they get back on their feet. Invariably the friend will either be a complete eccentric or have absolutely no regard for the people whose home they're squatting in. After having their lives turned completely upside down by someone who appears to have no clue as to the harm they're doing, the inevitable confrontation occurs.

Expect a tearful farewell from the guest as they disappear out into the cold, and a mountain of regret from the homeowners as they wonder whether there was a better way to handle the situation. Or, alternatively, an attempt for the guest to provoke a tearful farewell by acting wounded and bemoaning their hosts' ungraciousness — only for the by-now hard-hearted host, who has gone way past any limits of tolerance they may have had with this annoying and inconsiderate leech, to push them out the door (perhaps while screaming, "Get Out!"), slam it shut and lock it behind them.

Alternately, the host may end up facing a serious crisis that could lead to their being humiliated, ruined or otherwise facing a very bad outcome. When the host is at the end of their rope, the guest solves the problem either by turning to be a Crouching Moron, Hidden Badass who turns their skills to repaying their host's kindness, being The Social Expert and charming whoever is causing the host's grief, etc. The host's aggravation will likely dissipate after this.

Pity the adherent of Sacred Hospitality, who might have to put up with this from people they don't even like. As a result of this, many such codes include an upper limit on how long the rules apply or circumstances under which the rules no longer apply, such as if the guest was caught stealing from their hosts, or tried to rape any of the hosts. Compare the Basement-Dweller, who may become this to his (or more rarely, her) parents, especially if the dweller is still something of a Spoiled Brat. If they stay for more than one episode and become a mainstay of the series, they may be a Token Houseguest.

Named for the Saturday Night Live sketch that presented this premise as a horror movie trailer, featuring John Belushi as the Thing. Compare with The Cat Came Back and Pretty Freeloaders. For those who refuse to leave because they forget it's not their house, see House Amnesia.

For the webcomic of the same name, go here.