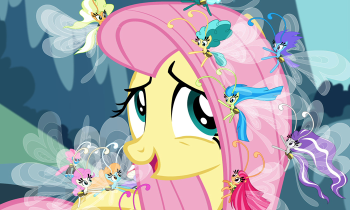 Swarm of the Season
Mane Six: You can do it, Breezies!
Written by Natasha Levinger
Advertisement:

Fluttershy is organizing safe passage for the Breezies, tiny fairy-like ponies who will be traveling through Ponyville with their collected pollen. They only have two days to reach the portal to their homeland, and the slightest thing could throw them off. When the Breezies appear, the whole town gathers in the square to watch them pass through. Spike, wanting a better view, climbs up on a tree branch and accidentally dislodges a leaf. Even this tiny obstacle is enough to disrupt the current of air the Breezies are riding, and a group of them are separated from the main herd. Fluttershy takes wing to rescue them

Seabreeze, the irascible (and apparently self-appointed) leader of the lost group of Breezies, insists they get right back on schedule. But the other Breezies need some time to recover, so Fluttershy takes them to her cottage to rest. It soon becomes obvious that the other Breezies would rather stay and enjoy her hospitality rather than resume the dangerous journey home. Seabreeze insists that they must go, but Fluttershy continues to give in to the demands of the slacking Breezies in the name of kindness. Finally, Seabreeze has had enough, and he leaves on his own.

Fluttershy gives chase and finds Seabreeze being menaced by a swarm of honeybees. She calmly and gently asks the bees to back down — and when that fails, she firmly orders them to leave. She tells Seabreeze that she sympathizes with his frustration but gentleness will get better results than anger and verbal abuse. The Breezie retorts that Fluttershy wasn't gentle with the bees. It's then that Fluttershy realizes that there are times when kindness means forcing others to listen to you, and that she must order the lost Breezies to start on the journey home. She returns to her cottage, firmly evicts the Breezies, and then sags against her door in tears.

In a clearing, the wind a few pegasi generate is either too strong or too weak for the group of Breezies because of their small number. To help them, Twilight casts a transformation spell that turns all of the Mane Six into Breezies, allowing the group to travel together. Along the way, Seabreeze shows what he has learned from Fluttershy, using encouragement and support rather than insults to motivate the struggling Breezies. They pass through the portal to the Breezie Kingdom with moments to spare, reuniting the weary Breezies with their families. As the Mane Six, transformed back to their normal selves, leave for Ponyville, Fluttershy is wearing a Breezie flower in her mane — a gift from Seabreeze — which gives off a rainbow shimmer...