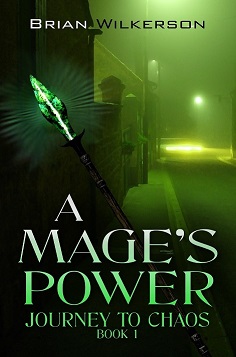 "I am Tasio the Trickster and I am here to help you."
Advertisement:

Due to 'help' from a mischievous trickster, Eric is stranded in a world where monsters and magic are as common as homework and hotdogs. While he struggles to adjust, he receives an offer to join a mercenary guild. Between training and missions, he's unaware of the forces at work in his life. All of them have a stake in his quest to acquire A Mage's Power.

A Mage's Power is Brian Wilkerson's debut novel and the first story in the Journey to Chaos series. The next book is Looming Shadow.

A Mage's Power contains these tropes