Visual Novel / They Are My Noble Masters 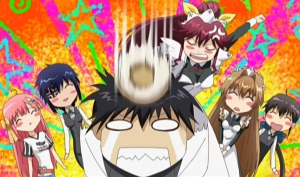 Being a butler sure is tough!
Advertisement:

Ren and his older sister Mihato run away from their abusive father, setting foot in the big city and determined to make it through together. Finding a job isn't easy though, but things look up when Ren helps a girl who faints from the summer heat. She appears to be a member of a very rich family and they just happen to be looking for a new butler and a maid.

So before they fully realize it, Ren and Mihato are hired by the Kuonji family, consisting of the three quirky sisters Shinra (a classical conductor), Miyu (a genius inventor) and Yume (a school girl and the youngest). The staff they employ are perhaps even crazier than the bosses, if that is in any way possible, and Ren finds his days filled with dealing with the hijinks of his demanding masters, his zany colleagues and his jealous sister - not to mention all the people that walk in and out of the mansion to stir things up even more.

They Are My Noble Masters (Kimi ga Aruji de Shitsuji ga Ore de in Japan) is typical ecchi fare, with a hapless teenage boy surrounded by beautiful women who all want a share of his attention. Unlike most other shows in the same vein, Ren is not quite the innocent or stupid protagonist, although he still gets beaten up on a regular basis when unwillingly (or willingly) seeing one of the female characters in various states of undress.

The makers of the show don't leave out the emotional material either, which in this case actually works pretty nicely and gives this show a bit more depth than you'd first expect despite the fact that it is filled to the brim with all kinds of otaku fetishes.

Not to be confused with He Is My Master (although you could be forgiven if you did).