Manga / The Great Jahy Will Not Be Defeated! 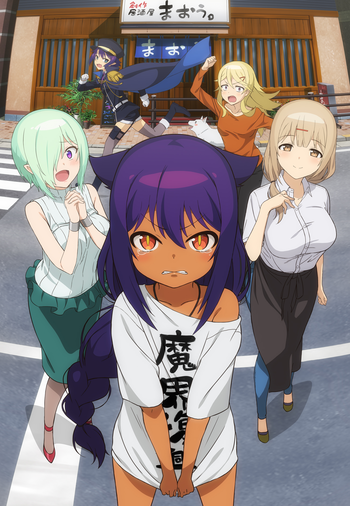 Meet Jahy, the second-most-powerful person in the Demon Realm. Powerful, ruthless, and surrounded by luxury and loyal minions all over, she was the envy of almost all of the Demon Realm...

...that is, until a magical girl just showed up and destroyed the Demon Realm's mana crystal, taking the entire realm with it.

Meet Jahy now. Living in squalor at an old apartment complex in modern-day Japan, and with no magic to sustain her, she's more or less stuck in a childlike form, able only to revert to her true form for a limited time for such important duties as... working part-time as waitress at the Izakaya Maou restaurant owned by her landlady's older sister.

But she won't be discouraged! She will search for magical gems to eventually restore the Demon Realm... no matter how many times she (comically) stumbles, goes up in arms with Ryou, her landlady whenever her rent is due, gets hounded by her old rival Saurva, or is reminded of the relative success of her former second-in-command, Druj, now a wealthy businesswoman. And that's not to mention the occasional run-in with the same magical girl that ruined her life.

The Great Jahy Will Not Be Defeated! (ジャヒー様はくじけない！, Jahī-sama wa Kujikenai!, "Jahy-sama Won't Be Discouraged!") is a comedy manga written and illustrated by Wakame Konbu (also known for Breasts Are My Favorite Things in the World! and The Maid I Hired Recently Is Mysterious), which started publication in Square Enix's Monthly Gangan Joker in 2017. Its English release is also handled by Square Enix, starting July 2021.

The series also received a 2-cour anime adaptation directed by Mirai Minato for SILVER LINK., which aired on TV Asahi note  and its Osaka affiliate, ABC from August 1, 2021 to December 19, 2021. It is available to stream on Crunchyroll subbed in most countries here

These Tropes Will Not Be Defeated!