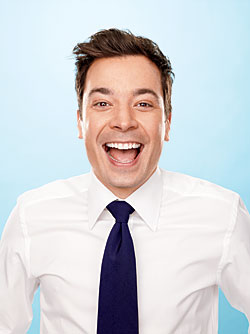 Mr. Sunshine
"When I was a kid, you would tune in to The Tonight Show before you went to sleep. Johnny Carson. A big treat. I know it's a privilege of mine to be able to be in people's homes. So I hope I make everyone proud, including my parents, and do a good job in this."
Advertisement:

James Thomas Fallon (born September 19, 1974 in New York City, New York) is a charmingly boyish actor, comedian, and talk show host. Best known for his work on Saturday Night Live, where he gained success at a young age but also garnered criticism for his shameless mugging and cracking up on-camera during sketches (particularly those where he's partnered with Horatio Sanz), a fact that Family Guy pointed out on the episode "Don't Make Me Over" (who also predicted that Fallon would be one of many former SNL cast members to come back and host an episode). His largest success on the show was as the co-anchor of "Weekend Update" with Tina Fey which showcased his strengths as a comedian. When Fallon left SNL at the end of the 2003-2004 season, he attempted a movie career, which did not go well.

On SNL, his popular recurring characters were Patrick Fitzwilliam (one of the hosts of the Irish morning show, "Top O'The Morning." The other was a pre-Weekend Update Seth Meyers), Pat "Sully" Sullivan (one of the Boston Teens), Jarrett (a stoner college student who hosts his own web show, Jarrett's Room), Kip Bloater (a bar hopper), and Nick Burns (a sarcastic computer technician). His notable celebrity impressions (when he was a cast member on SNL, on his talk show, and when he came back to host) include Dennis Miller, Chris Rock (in so much black make-up that you wouldn't know it was him. See here

(who always introduced himself as being a massive tool), John Lennon

(He didn't even SPEAK playing), Harry Styles from One Direction

note  Him and Brooks Wheelan

were the only people to play Harry, and neither of them spoke., Alan Rickman, Michael Buble

(from the Subway ads), Jeff Zucker

After a string of film flops, SNL exec producer Lorne Michaels signed Fallon to a holding deal with NBC in 2007, and in 2009, he replaced Conan O'Brien as the host of Late Night. Despite lukewarm early reviews, Fallon and his staff succeeded in turning the show into one of the most buzzed-about shows in the late night pantheon, due in part to their upbeat, optimistic approach to comedy and their use of extravagant pre-taped features, such as parodies of Glee ("6-Bee"), Lost ("Late"), Real Housewives ("The Real Housewives of Late Night"), True Blood ("Suckers"), Breaking Bad ("Joking Bad") and Jersey Shore ("Jersey Floor").

This led to him being chosen as Leno's true successor to The Tonight Show in 2013. With the show (long based in Los Angeles) relocated to Fallon's stomping grounds at 30 Rockefeller Center, the 2014 transition, The Tonight Show Starring Jimmy Fallon, has been a successful one as many of the Late Night recurring bits, house band The Roots, and sidekick Steve Higgins have been introduced to a wider audience.

His popularity on the show has led to him appearing in several forms of spin-off material; most notably receiving his own ride at Universal Studios Florida, called Race Through New York Starring Jimmy Fallon, which opened in 2017. He also serves as the current narrator for the tram-based Studio Tour at Universal Studios Hollywood.

He's released two comedy albums (The Bathroom Wall and Blow Your Pants Off, the latter a collection of Late Night musical numbers) and hosted the Emmys in 2010. He's also written six books: I Hate This Place: A Pessimist's Guide to Life, two collections of Thank You Notes (derived from a popular Late Night / Tonight Show bit that occupies the Friday post-monologue slot), and the children’s books Your Child’s First Word Will Be Dada, Everything Is Mama, and This is Baby.