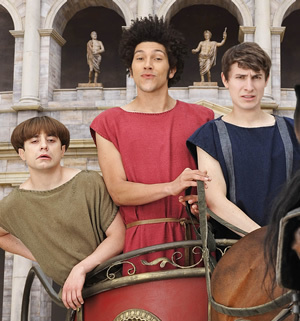 Plebs is a 2013 ITV sitcom set during The Roman Empire and revolves around two young plebs, Marcus (Tom Rosenthal) and Stylax (Joel Fry), and Marcus' slave, Grumio (Ryan Sampson). At the start of the series they've been living in Rome for 6 weeks, and Marcus and Stylax work together at a scriptorium, with a Bad Boss who treats them like crap. In the first episode, a young Briton, Cynthia, and her slave Metella become their neighbours, and Marcus quickly develops a crush on Cynthia.

Described by the Radio Times as The Inbetweeners meets Rome. Four series have aired, with a fifth confirmed to air in 2019.