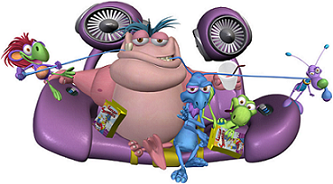 Pet Alien (2005) is an All-CGI Cartoon cartoon that follows the life of young man Tommy Cadle and his alien houseguests Dinko, Extreme Omnivore Gumpers, Deadpan Snarker Swanky, Cloud Cuckoolander Flip and Team Pet Scruffy. A total of 52 half-hour episodes were produced, though a number of them were left unaired in the original broadcast.