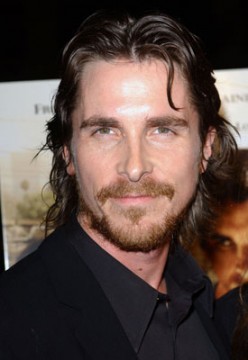 "You fancy my acting prowess, huh? OH, GOOD FOR YOU!!"
"There are moments of real sort of hatred for [acting] and thinking that it's the most pitiful, funny, ridiculous profession that you could ever pick. And it feels like anything but art; it feels as far from art as you could possibly get. And then there are other moments where you go, 'I love it! There’s all tha crap that goes with it. Holy shit! I love it as well.'"
Advertisement:

Christian Charles Philip Bale (born 30 January 1974) is an actor born in Wales, of English extraction, and a naturalized citizen of the USA since 2014.

Bale is a former child star turned very versatile leading man, with a reputation for taking any role that challenged him. While his most famous role prior to the Batman films was his performance as Patrick Bateman in the film adaptation of American Psycho, he's also known for being willing to radically transform his body for a role. He lost 63 pounds for The Machinist, immediately gained it back and then some (100) to play everyone's favorite masked vigilante in Batman Begins, then went skeletal again to star in Rescue Dawn, then gained it back for The Dark Knight, then went skeletal again to star in The Fighter. And then made The Dark Knight Rises. And then put on 43 pounds to play an overweight man in American Hustle. Most recently, he's put on even more weight to play

former US Vice-President Dick Cheney in Vice with terrifying accuracy.

If you ever needed someone to play both Laurel and Hardy in the same movie, this is the actor you'd turn to.

Case in point: he was cast as President George W. Bush in W. in 2008 (though he dropped out in pre-production), and went on to play Vice President Dick Cheney in Vice a decade later. That's right—Bale very nearly played both of these guys

Although he likes to keep details of his personal life away from the public eye, he's not immune to some controversy. In 2008, he was charged for verbal assault on his mother and sister, but he denied the allegations and the charges were dropped on the grounds of lack of evidence. On February 2009, an audio recording of Christian's lengthy tirade on the set of Terminator Salvation, in which he verbally assaulted Director of Photography Shane Hurlburt for wandering about during the shooting of a pivotal scene one time too many, was leaked online. Following the leak, Christian issued a public apology, saying that his actions were "inexcusable" and that he "acted like a punk"; prior to the leak, Christian and Hurlburt talked out their problems almost immediately after the rant.

The rant was turned into various dance mixes, such as "Bale Out"

(with an obligatory cameo by Barbra Streisand), which is quite an earworm even by Bale's admission.

(Yes he has, in fact, played Jesus, Moses and Batman).

Tropes invoked by this actor include: