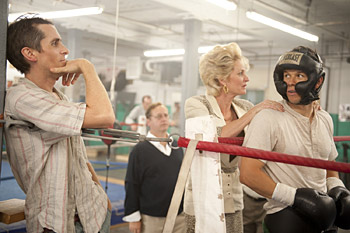 "I'm the one fighting, okay? Not you, not you, and not you."
— Micky Ward
Advertisement:

An acclaimed 2010 film by director David O. Russell, based on the life of Lowell, Massachusetts boxer "Irish" Micky Ward, a major figure in international boxing from the late 1990s until his retirement in 2003.

As our story opens in 1993, Micky is a struggling boxer in a working class Lowell neighbourhood. He is perennially in the shadow of his older brother Dicky Eklund, whose claim to fame as a boxer was knocking down Sugar Ray Leonard in a single fight in the late 1970s (despite the fact that Sugar Ray got back up and won). Dicky has since fallen on hard times, becoming addicted to drugs and generally a screwup; he's being followed by an HBO documentary crew that is supposedly documenting his "comeback" (but is in fact using him to make an documentary on substance abuse). Micky, who is depending on his brother to be his trainer, is becoming increasingly annoyed with his brother and his manager-mother Alice. Micky also takes an interest in barkeep Charlene, who thinks Micky is being exploited and neglected by his family. Naturally, his family dislikes Charlene and his bitchy, overbearing mother and sisters try to keep the two of them apart.

Not to be confused with the character class in Final Fantasy or Dungeons & Dragons.