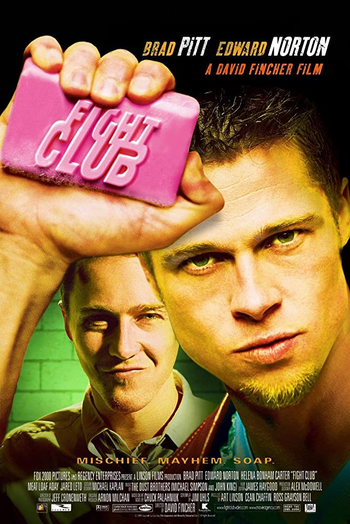 Mischief. Mayhem. Soap.
"I want you to hit me as hard as you can."
— Tyler Durden
Advertisement:

Fight Club is a 1999 film directed by David Fincher and adapted by screenwriter Jim Uhls from the 1996 novel of the same name by Chuck Palahniuk.

The film's story follows the life of an unnamed man (Edward Norton)— named simply as "Narrator" in the credits and referred to as "Jack" in the script due to his recurring "I am Jack's ____" monologue — who has grown discontented with his life, which seems only to revolve around his dreary corporate job, going to support group meetings for diseases he doesn't have, and endless bouts of meaningless consumerism.

During a business flight, the man meets a charismatic free spirit named Tyler Durden (Brad Pitt), and they eventually start a "support group" — the titular "Fight Club" — where other unhappy, unfulfilled men get together and fight each other in bare-knuckle brawls as a form of "therapy." Fight Club eventually escalates as Tyler turns from the man's best friend into a Sensei for Scoundrels — and, eventually, into an Evil Reactionary.

A sequel simply titled Fight Club 2 was released in 2015-16 in comic book format, written by Palahniuk. Taking place ten years later, the Narrator (here given the name Sebastian) and Marla are married, have a child, and are living a stable if boring suburban life. Things are shaken up as Tyler Durden makes his return with even greater plans than the first time. Meanwhile, Palahniuk himself is also a character in it, writing the story as it unfolds. It gets very, very metatextual.

If this is your first time at Trope Club...you have to trope.
Feedback