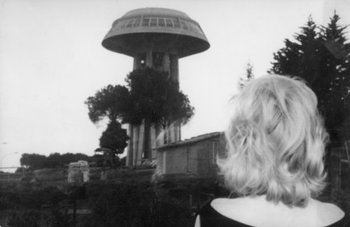 See what he did here?
Advertisement:

L'eclisse (English translation: The Eclipse, might also be untranslated) is a 1962 romance drama film directed by Michelangelo Antonioni. The movie is set in Rome in the summer and autumn of 1961. Main roles are performed by Monica Vitti and Alain Delon. It was awarded the Special Jury Prize at the 1962 Cannes Film Festival.

Also starring is Lilla Brignone as Vittoria's mother and Francisco Rabal as her former fiancé Riccardo.

This was the third in the informal trilogy of alienation, with its predecessors being L'Avventura and La Notte. L'eclisse also was Antonioni's final black-and-white film. Sometimes Antonioni's subsequent film, Il deserto rosso, is included in this series too, to make it a tetralogy.

Antonioni wrote the script in collaboration with Tonino Guerra and two other writers. Gianni di Venanzo was the cinematographer for the fifth and the last time in Antonioni films.