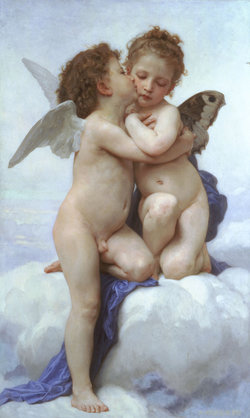 Well, we all know what a first kiss is, so let's just get down to the trope.

An individual's first kiss will generally be the subject of a great deal of nervousness. It may be preceded by some Kissing Warm-Up. Subjects (usually teenaged) will approach one another tentatively. They'll want it to be perfect, and with the perfect person, and when it inevitably isn't... well, it'll turn out all right anyway. In Japan, where the culture is more strict, the first kiss is an even bigger deal; Sacred First Kiss has more details.

A couple's first kiss will be the subject of much squeeing among fans, who have had to suffer through Will They or Won't They? for months or years. It may end the UST and result in a Relationship Upgrade, or may be sacrificed at the altar of the god, Status Quo. These kisses tend to be made in times of high stress, because the participants Cannot Spit It Out under normal circumstances. This often becomes The Big Damn Kiss, especially in action-packed dramas.