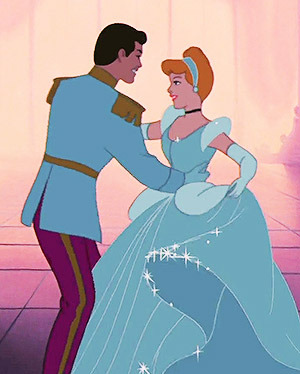 "Oh, I wanna dance with somebody...
with somebody who loves me."
"But something happens when we slow dance."
— Keri Hilson, "Slow Dance"
Advertisement:

So Alice and Bob, who either don't know each other very well or are Just Friends, are attending some fancy party. For some reason, they wind up dancing to some slow romantic song that requires waltzing or some other dance typified by close body contact. Hey, that's ok, nothing special — except she's starting to blush, and he's getting all nervous. Could it be? Are they in love?

This often pops up during high school dances and fancy parties, the kind with hooped skirts and masks. For some reason, waltzing with a friend, or friend-of-a-friend, always winds up with one or both participants acquiring (or realizing) feelings of love towards the other, as though it were some kind of movement-driven truth/love spell. Often prefaced by an observation that She Cleans Up Nicely, and frequently occurs during a High-School Dance, though it is by no means exclusive to teenagers.

A subtrope of Dances and Balls, obviously.

When adding examples, keep in mind that this trope is about the dance being the first indication of romance between the dancers, not just a romantic dance between two people who are in love (or in denial).

Chances are a Love Theme will be playing.

Blu and Jewel start to have feelings for each other when they have a duet at the samba club.

Blu and Jewel start to have feelings for each other when they have a duet at the samba club.