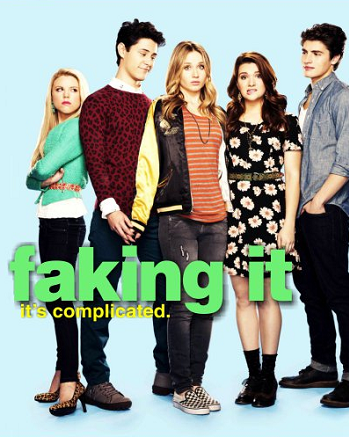 Faking It is a 2014 MTV series created by Carter Covington (Greek, 10 Things I Hate About You, Hart of Dixie) which highlights the extreme lengths some teenagers will go to climb the social ladder. The series premiered April 22, 2014.
Advertisement:

But Karma is obsessed with popularity, to the point where she agrees to keep her and Amy's heterosexuality under wraps, as their newfound popularity has given them a chance to become Homecoming Queens and finally makes them accepted by the in-crowd at their school. Complications ensue: Karma's obsession with her actual crush, Liam (Gregg Sulkin); Amy's soon-to-be-stepsister Lauren (Bailey Buntainnote De Young in the 2nd & 3rd seasons), who would be the Alpha Bitch at any other high school and hates that Amy is now far more popular, and Amy's own mixed feelings for her best friend. How long can they keep their fake relationship going, and can their real relationship survive it?

The show lasted for three seasons. Its finale aired May 17, 2016. Not related to the British series of the same name (which is a reality TV show about people from one type of professional background trying to pass as a professional in another area after a few weeks of training, e.g a burger cook trying to convince a panel of judges he was a cordon bleu chef after a crash course from Gordon Ramsay.)

"What would it do to Karma if she found out that her soulmate...slept with you?"