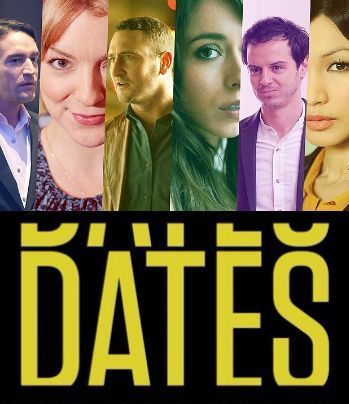 Dates is a Channel 4 original programme of short self-contained episodes looking at the dating lives of different couples. The episodes surround one date in the life of different couples, all in London. As a series, though, the show brings the couples together and has characters interact outside their pair, being a conducive whole rather than separate stories on the same theme.

Over a number of episodes, Mia (Oona Chaplin) learns to let down her guard and get closer to David (Will Mellor); Jenny (Sheridan Smith) begins to trust men more as she moves on from bad experiences, but also rebuilds her own self-confidence; and Erica (Gemma Chan) comes to terms with her sexuality. Their various dates involve conflict and revelations with promiscuous Nick (Neil Maskell), conceited Stephen (Ben Chaplin), confident Kate (Katie McGrath), wise Ellie (Montanna Thompson), friendly Callum (Greg Mc Hugh), and deceptive Christian (Andrew Scott).

Not to be confused with First Dates, a similar show that began airing on the same channel a week later, but in a reality format rather than fictional.

Tropes to be found on these dates are: