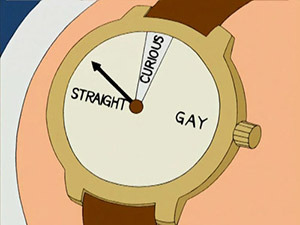 The aspect of works of fiction where there is a lack of bisexual characters despite the definite existence of bisexual people in Real Life (at least 1.8% of US population), and often don't even acknowledge their existence. Although some series don't address any sexuality specifically, even gay characters tend to be more numerous.

Almost any character in a same-gender relationship or professing a same-gender attraction is assumed by the others to be either gay or joking. If the existence of bisexuals is acknowledged, they're usually depicted as very promiscuous and totally defined by sex, and sometimes even as predatory (mirroring prejudices leveled against real life bisexuals). A few characters do manage to use a version of Ambiguously Gay to avoid scrutiny (see Hide Your Lesbians). A function of this is when a character who has been seemingly heterosexual until this point falls for a member of their own gender, they jump the fence and become only interested in their own gender from that moment on; the possibility that they might be bisexual is never even brought up.

The trope especially purports that there are no bisexual men, particularly in Western productions. Some female characters, due to the Girl-on-Girl Is Hot and Sweeps Week Lesbian Kiss rules, can explore all sides of their sexuality as much as they want, especially if they're identified as promiscuous or plain evil. However, such characters will rarely call themselves bisexual; they may insist they're straight, or just leave it up in the air. Meanwhile, since male characters often act as the Audience Surrogate, their sexuality has to be strictly heterosexual, lest the show be forced into the Minority Show Ghetto.

Compare If It's You, It's OK, where an otherwise gay/straight character expresses interest in someone outside their usual target zone with nary a mention of the B word. Contrast Depraved Bisexual. Compare Bi-Wildered.

Yet another polarity of this trope is assuming that a bisexual person has to be omnisexual, i.e. bang Anything That Moves, and sometimes not being even that picky: there is no in-between, anyone willing to sleep with multiple genders is assumed to literally not caring about the difference.

Also contrast But Not Too Bi, which is essentially this trope in reverse — a character who is established as bisexual yet only shows interest in one gender. This can be one particularly unfortunate outcome of Bisexual Love Triangle. The polar opposite of Everyone Is Bi, where either an unusually high number of characters seem to be at least mildly bisexual or sexuality is never presented as an issue. See Kinsey Scale of Tropes for more generalities about these tropes.