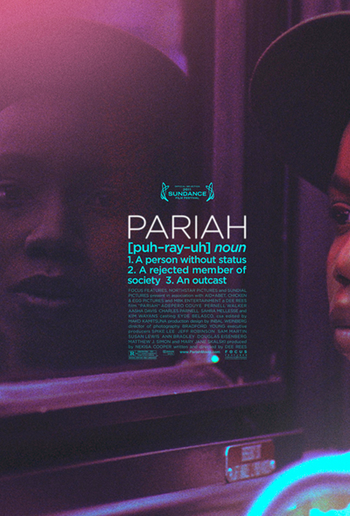 Pariah is a 2011 drama, written and directed by Dee Rees. It follows Alike (Adepero Oduye), a seventeen-year-old living in New York's Fort Greene neighborhood, as she struggles to establish a sexual identity. Alike ('Le' for short) is gay, but hasn't come out, unlike her best friend Laura (Pernell Walker). She especially avoids discussing it with her religious mother (Kim Wayans) and police officer father (Charles Parnell), although they have their suspicions.
Advertisement:

Alike's mother tells her to spend time with Bina (Aasha Davis), the daughter of a coworker, who she deems more appropriate than Laura. As Alike develops feelings for Bina, the stresses caused by her familial and other relationships eventually drive her to embrace the identity she's been trying to hide.