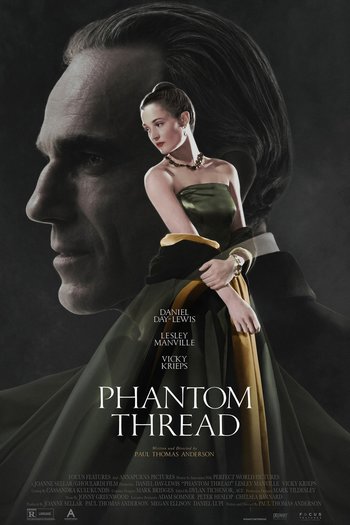 "Whatever you're going to do, do it carefully."
— Alma Elson to Reynolds Woodcock
Advertisement:

Phantom Thread is a 2017 drama film written and directed by Paul Thomas Anderson, starring Daniel Day-Lewis (in what is his final role before retirement), Lesley Manville, and Vicky Krieps.

The film is an exploration of mid-20th-century fashion. Reynolds Woodcock (Day-Lewis) and his sister Cyril (Manville) run the prestigious Woodcock fashion house, dressing royalty, heiresses, and other members of high society. Women come and go through Reynolds' life, put off by his Control Freak nature. However, a relationship with a waitress named Alma (Krieps) throws his carefully controlled life out of order.

In addition to writing and directing the film, Anderson also served as cinematographer for the first time.