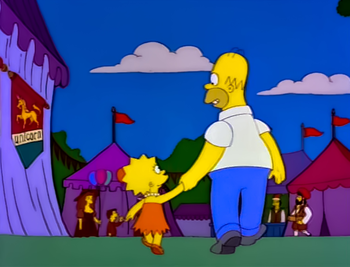 "But I loved her first
I held her first
And a place in my heart
Will always be hers"
— Heartland, "I Loved Her First"
Advertisement:

The daughter adores the father-figure and at times the mother (if there is one) feels left out. The daughter is usually either a single child or the only girl in the family. Likewise she's often the father's favorite. In extreme instances, this can be Wife Husbandry or result in the daughter becoming obsessed with her father to the point of Electra Complex.

Due to their close contact with the male parent, Daddys' Girls can sometimes acquire boyish traits and interests at odds with expected female personality types like One of the Boys. On the opposite end of the spectrum, she might be especially girly like his sweet little princess. The third possible character is the socially awkward one who gets understanding and encouragement from her father. Naturally, any girl who looks up to her father this much wants to follow in his footsteps. At times, the girl can also end up as a Bratty Teenage Daughter (or Spoiled Brat if the father is rich).

Daddy is typically very protective of his girl, ranging from Twerp Sweating potential suitors to going full Papa Wolf on men who wrong her.

If the family consists of a girl, a boy, a mother, and a father, the girl will most likely be Daddy's Girl and the boy will be a Momma's Boy (Spear Counterpart). If the Daddy's Girl acquires a stepmother, there will most likely be tension between the two, as one (or each) will be jealous of the other and the woman will either become or be seen as a Wicked Stepmother.

Louise accidentally reveals to Bob that she would run the restaurant in the future, much to her embarrassment.

Louise accidentally reveals to Bob that she would run the restaurant in the future, much to her embarrassment.