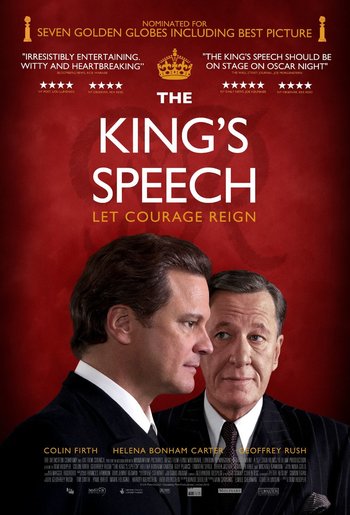 When God couldn't save The King, The Queen turned to someone who could.
Lionel: Why should I waste my time listening to you?
Bertie: Because I have a right to be heard! Because I HAVE A VOICE!
Lionel: ...Yes, you do.
Advertisement:

The film depicts the early years of Prince Albert, Duke of York (Firth) — the man who would be King George VI of the United Kingdom of Great Britain and Northern Ireland — and his struggle with a severe speech impediment that kept him from carrying out public speaking engagements. His wife Elizabeth, Duchess of York (Bonham-Carter), enlists the services of failed Australian actor-turned-speech therapist Lionel Logue (Rush) to help her husband. Logue's unconventional methods do indeed begin to make some progress. Meanwhile, however, Prince Albert's older brother Edward VIII (Guy Pearce) makes a royal botch of his own marriage plans, thrusting him even further into the spotlight, even as another famous public speaker is stirring up trouble on the continent.

Lionel: Forget everything else, and just say it to me.
Feedback