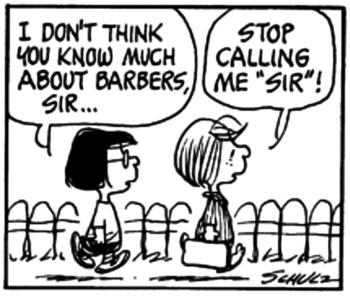 "Don't call me Sir. Call me Rocko."
— Rocko, The Pebble and the Penguin
Advertisement:

A character is in a position of high authority or status, and as a part of this, is owed respect and even obeisance from those considered beneath him.

However, this person refuses to take advantage of the situation. He insists that he be addressed by name rather than title, he stops people who try to bow to him, he corrects people who try to avert their eyes. While still being cognizant and proud of his position, he tries to minimize the social distance between himself and members of other classes.

The reasons for this vary considerably and tend to be complex. He may hate to see others degrading themselves before him (particularly if the gestures in question have religious overtones). He may be from humble origins and uncomfortable with such shows of respect, perhaps because he fears he is being mocked or doubts his own worthiness to receive them. He may be trying to endear himself to the lower classes in a deliberate gambit to seem personable. Or he may simply find it tiresome and impractical and say something to the effect of "Formalities are a waste of time." Another very common possibility is that the character (perhaps correctly) views formality with suspicion because it is formulaic: and therefore makes lying easier.

If this character is very powerful, such as a king, he will often try to change the behaviours of those around him or abolish denigrating practices. Whether this works generally depends on the kindness of the setting. Often a trait of the Royals Who Actually Do Something, though they do not have to have this trait.

This trope also pops up in works that involve the military whenever a non-commissioned officer (usually a Sergeant) is referred to as "sir" as the title is typically reserved for commissioned officers. There are a couple of stock responses from the NCO. One is "Don't call me Sir, I work for a livingnote Or alternately, (usually in the U.K.) "I work for my money".." Another is, "Don't call me Sir, my parents were married." Roughly 90% of the time this pops up it's when Drill Sergeant Nasty is introducing the fresh-off-the-street recruits to their basic training.

A common way to play with this trope is to have one character insist on being called by name, but another character, usually a servant or similar role, agrees and continues using the title anyway, in the basic form of: "Don't call me Sir." "Yes, Sir." The two characters may argue about this throughout the story, and the eventual use of the first name by the subordinate character can be used to show the development of their relationship. (The Old Retainer hates it.) Or conversely, the privileged character may come to accept the use of their title: having grown into it, or come to understand their position better, over the course of the story.

This is a Super-Trope of the second variant of They Call Me MISTER Tibbs!, where a character insists upon First-Name Basis in order to be more jovial.

Note that a woman who says "Don't call me Ma'am" is usually NOT invoking this trope: but rather is annoyed that you think she is either old or married. She wants to be called "Miss", either because of vanity or because she is in fact not married. Can apply to male characters as well, in settings where a separate title for unmarried boys is used.

After the two of them have a talking out, Blitzo tells his Moxxie to call him by his name, rather than Sir.

Alternative Title(s): Do Not Call Me Sir

After the two of them have a talking out, Blitzo tells his Moxxie to call him by his name, rather than Sir.