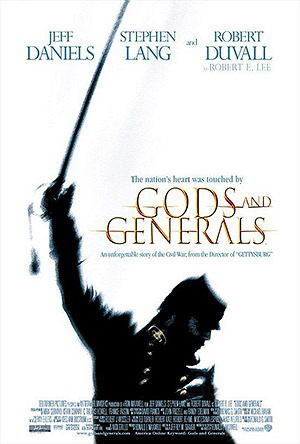 Gods and Generals is the prequel to the 1994 film Gettysburg. The film focuses on Confederate General Thomas "Stonewall" Jackson, from the outbreak of The American Civil War until his death from friendly fire at Chancellorsville. It also features the back story for Colonel Joshua Chamberlain, who appeared in Gettysburg and is once again played by Jeff Daniels.

It was based on the novel of the same name by Jeff Shaara, who took over writing duties after the death of his father, Michael (from whose book The Killer Angels Gettysburg was adapted).

As of 2012, two versions of the film are available to the public: the 3.5 hour version that was released in theaters in 2003 and the 4.5 hour Extended Director's Cut that was released to 2011. Opinion varies on which one is better, but general consensus sides with the latter.

Gods and Generals provides examples of: